To share your memory on the wall of Jerry DeCarlo, sign in using one of the following options:

Provide comfort for the family of Jerry DeCarlo with a meaningful gesture of sympathy.

Born in Harlem on December 22, 1922, he was the son of Luigi and Gloria DeCarlo. Jerry proudly served our country in th... Read More
Jerry DeCarlo, 97, an area resident since 1988 and formerly of Yonkers, died peacefully on May 22, 2020 at his home.

Born in Harlem on December 22, 1922, he was the son of Luigi and Gloria DeCarlo. Jerry proudly served our country in the US Army during World War II. He had been employed as an Insurance Salesman for Metropolitan Life Insurance Company in Hartsdale for 30 years until his retirement in 1977. He was an avid hunter.

Private entombment will be held at the Community Mausoleum at Poughkeepsie Rural Cemetery.
Read Less

Consider providing a gift of comfort for the family of Jerry DeCarlo by sending flowers.

We encourage you to share your most beloved memories of Jerry here, so that the family and other loved ones can always see it. You can upload cherished photographs, or share your favorite stories, and can even comment on those shared by others.

Posted May 29, 2020 at 03:54pm
Dear DeCarlo Family and Kathleen,
I work for an eye doctor in Hopewell, Jerry was my patient. He was one of the most wonderful people I have encountered in my 22 years. He had the most genuine smile when he came in the office and he would seek me out. Sorry Kathy...he said he wanted to marry me many times, but you and I know he had enough love to go around. : ) I wanted so badly to attend and express my condolences to all of you. He was a cherished man, I was blessed to know him. I pray he watches over all of you and includes me too. I love you Jerry, thank you for always making me feel so special...until we meet again may all the angels receive you into heaven
Debbie
Comment Share
Share via: 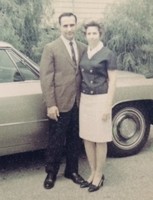