To share your memory on the wall of Dolores Way, sign in using one of the following options:

Daughter of the late Manuel Bermudez Vega and Rosario Rodriguez Lopez, she was born in ... Read More
FISHKILL – Dolores “Lolly” Bermudez Way, a Fishkill resident since 1966, passed away peacefully at home on Tuesday, June 16, 2020. She was 87.

Daughter of the late Manuel Bermudez Vega and Rosario Rodriguez Lopez, she was born in Arcos de la Frontera, Cadiz, Spain on February 23, 1933. On July 8, 1965, she married Allan R. Way at Our Lady of Fatima Church in Madrid. In 1966, they emigrated to the United States and settled in Fishkill, Allan’s home town.

Dolores was a longtime member of the Fishkill United Methodist Church, where she volunteered as a youth group leader accompanying the other adult leaders with the youth of the church on their annual retreat to Martha’s Vineyard in the summer. She also helped with the Sunday children’s nursery. She was also a member of the Fishkill Protection Engine Company Ladies Auxiliary and held the office of Vice President in 1996-1997.

Dolores worked as a seamstress her entire life and had a talent for custom-tailoring. She donated her sewing talents to the community by handling alterations and hemming of various items for the church, fire department, and many others. She was an avid gardener and always maintained a variety of flowers and plants.

Her husband, Allan, survives at home in Fishkill. Additional survivors include her daughter, Dolores “Didi” Spero & her husband Ronald of Poughkeepsie; her granddaughter, Nicole Spero of Poughkeepsie; her sister-in-law, Carol Canelas of Cary, NC; and many nieces, nephews, and other loving relatives & friends. Dolores especially treasured her role as “Nana” to her granddaughter, Nicole.

Dolores was predeceased by her parents as well as her brother Francisco Bermudez, and her sister Rosario Bermudez Rodriguez.

Calling hours will be held from 10 a.m. to 1 p.m. on Monday, June 22 at the McHoul Funeral Home of Fishkill, Inc., 1089 Main Street, Fishkill. A funeral service will begin at 1 p.m., followed by entombment in the Community Mausoleum at Fishkill Rural Cemetery.

Please note: In compliance with NYS guidelines, social distancing will be required and capacity may be limited.

Donations in Dolores’ memory may be made to Hudson Valley Hospice or the Fishkill United Methodist Church.

For online tributes, you can visit her Book of Memories at www.mchoulfuneralhome.com.
Read Less

Consider providing a gift of comfort for the family of Dolores Way by sending flowers.

We encourage you to share your most beloved memories of Dolores here, so that the family and other loved ones can always see it. You can upload cherished photographs, or share your favorite stories, and can even comment on those shared by others.

Posted Jul 21, 2020 at 08:23pm
Allan and Family, my sincerest sympathies. Please know that I am thinking of you and praying for your comfort.
Comment Share
Share via:
AM

Posted Jul 08, 2020 at 10:41am
Wishing you peace to bring comfort and loving memories to forever hold in your hearts. Sent with love and remembrance.

Posted Jun 19, 2020 at 04:14pm
Lowly was a special person who always had a smile for everyone. Her bright smile always made my day when I saw her. Special prayers to Allan and Didi and the rest of the family.
Comment Share
Share via:
C

Posted Jun 18, 2020 at 02:19pm
Lolly was a wonderful friend and a very talented seamstress. I felt privileged to have known her. Our conversations were special because oftentimes they were in Espanol. Que Dios la bendiga.
Comment Share
Share via:
FW

Posted Jun 18, 2020 at 12:19pm
God got a very special woman in heaven this week. Had many good times with lolly throughout the years. My prayers are with the entire family. Love, Fran WIlliams
Comment Share
Share via: 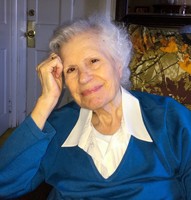