To share your memory on the wall of James Polewaski, sign in using one of the following options:

He was a 1961 graduate of Sleepy Hollow High School and was later honorably discharged from the US Army in 1967. Jame... Read More
HOPEWELL JUNCTION – James Stanley Polewaski, 77, passed away at Vassar Brothers Medical Center on November 12, 2020.

He was a 1961 graduate of Sleepy Hollow High School and was later honorably discharged from the US Army in 1967. James was a 1986 graduate of the Westchester County Corrections Academy and was employed by Westchester County Department of Corrections. James also served as a volunteer fireman with the North Tarrytown Fire Patrol and at Ocean Reef Club in Key Largo, FL.

James was a kind, honest and quiet man. He happily became one of Jehovah’s Witnesses in 1980. He enjoyed walking on the shoreline, snorkeling, listening to Golden Oldies, and watching Bigfoot videos. He was happiest when relaxing with family and working quietly in his garden with his cat under the sunshine.

Memorial service to be determined at a later date. Arrangements are under the direction of the McHoul Funeral Home, Inc. Please visit James’ Book of Memories at www.mchoulfuneralhome.com.
Read Less

Posted Nov 28, 2020 at 01:43pm
James was one of my spiritual fathers. Even though we are not by blood. He always welcomed me into his home. Many evenings having tea with Cin. He never sent me away. I was apart of the family while we were neighbors. I even followed them to Poinciana, and was going to try if they made it to Hawaii. I loved listening to his classic music, and watching him with his fish, his love of animals, and gardening. I can’t wait to find him snorkeling or caring for the earth. “Just around the corner”🎶 🎵 in paradise. Isiah 35:6
Comment Share
Share via: 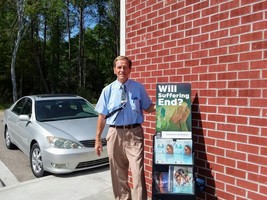