To share your memory on the wall of Rosemary Fischer, sign in using one of the following options:

She went to great lengths to build a creative, challenging and interesting life. She was an artist who painted for sixty years, a weaver, jewelry maker, journal keeper and adventurer. She lived in many locations from the Northeast to Key West, where she joined a thriving artistic community and she traveled extensively.

As a teenager she learned to sail, crewing on small racing boats on Long Island Sound. Later in life she returned to sailing with her husband, covering most of the Eastern Seaboard and the Caribbean.

After her nurse’s training was interrupted by illness as a young woman she worked for a pediatrician. Thirty years later she completed her studies and earned her RN. She then worked at Misericordia Hospital in The Bronx. She counseled people affected by addiction and formed lifelong relationships with many.

She was a devoted daughter, sister, wife, mother, grandmother and friend. In her Key West days, she would drive alone up to New York or fly to the Mid-West to be with her grandchildren and family for extended stays.

She is survived by her daughter Julia and partner Aaron, son Joshua and wife Maurette, son John and wife Angela, her grandchildren, Lily, Nate, Sawyer, Roman and Steve, her sisters Alice and Mary Anne and a large extended family. She is predeceased by husband Steve, her father Francis, mother Bess, and sister Francie.

Rosemary’s independent spirit, her generosity, compassion and understanding will be greatly missed by all who knew her.

A memorial service in her honor will be planned when it is safe to gather again.
Read Less

Consider providing a gift of comfort for the family of Rosemary Fischer by sending flowers.

We encourage you to share your most beloved memories of Rosemary here, so that the family and other loved ones can always see it. You can upload cherished photographs, or share your favorite stories, and can even comment on those shared by others.

Posted Mar 24, 2021 at 04:30pm
Hello, this is Gail Keeler. I met Rosemary in an art class at Florida keys community college many years ago. We became friends, sharing laughs in water aerobics, commiserating about men, and dreaming of where we would next travel in our own RVs. Rosemary was always a good listener, providing thoughtful suggestions and a shoulder to cry on. I remember her delicious salads! As our lives took us to locations outside of key west, we stayed in touch. I always appreciated her caring nature and willingness to listen. She was a deeply spiritual and loving person. And she will be missed.
Comment Share
Share via: 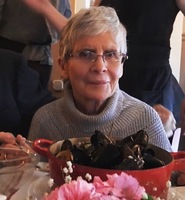