To share your memory on the wall of Patricia Accomando, sign in using one of the following options:

Patricia was born on September 29, 1948 to Charles and Helen Hart. She grew up in NY and attended Arlington High School. She worked at Con Edi... Read More
Ocala, FL - Patricia Anne Hart -Accomando passed away suddenly on March 26, 2021 at her home.

Patricia was born on September 29, 1948 to Charles and Helen Hart. She grew up in NY and attended Arlington High School. She worked at Con Edison until she retired and moved to Ocala, Florida. Patricia was a Postulant in The Legion of Mary and in the Alliance of Two Hearts International. Her passion was her family and missionary work. She worked tirelessly making and giving away peace rosaries.

Patricia is survived by her brothers Robert Hart (Dale) and Charles Hart Jr (Ann); and five daughters, Gayle Ferguson, Leslie John (David), Stephanie Moroney ( Kenneth), Heather Ferguson (Thomas) and Kristine Ferguson. She has 18 grandchildren, 2 great grandchildren and many nieces and nephews that meant the world to her. She was predeceased by both her parents; her brother Michael; and her baby Grace Marie.

The Mass of Christian Burial will be offered at St Denis Church, 602 Beekman Road, Hopewell Junction at 11 am on Monday, April 5, 2021. A reception to follow at Anthony's Catering.

Consider providing a gift of comfort for the family of Patricia Accomando by sending flowers.

Posted Mar 31, 2021 at 11:55pm
To the entire family of Patricia Accomondo. I wish each and everyone of you a great big hug and many prayers to help you all get through this most difficult of times. Your mother’s life was always enlightened when she was with one or many of your grandchildren and her “ girls”! Patricia always shared happy thoughts of you whenever I spoke with her. She also loved her family so very very much. Each and everyone of you brought your mom happiness and love. She will live on in each one of you. Remember how much love she had for each of her and you all made her Proud!!! RIP Patricia your loving family will continue to make you proud!!!!
Comment Share
Share via: 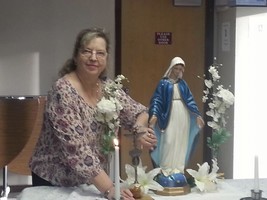