To share your memory on the wall of John Seguine, sign in using one of the following options:

John will always be remembered for his eclectic and engaging personality, and his care for those around him. He was highly intelligent and extremely well read from his daily review of numerous newspapers, always ready with a glean in his eye to give his strong opinion or comment on the news of the day. He took pride in knowing what was going on and keeping his friends up to date, “in case you didn’t know”. His memory was almost photographic, as he would concisely report on random events from far in the past as if they were yesterday.

John overcame tough challenges his entire life, including the premature loss of his parents, and more than a few accidents that left him reeling. He always persevered. He and brother Jim worked for their dad and Nana Seguine at the Sylvan Lake Telephone Company. John served as an altar boy at St. Columba and St. Denis. He graduated from Saint Columba and then John Jay. He grew to become a great golfer and skier, teaching his younger brothers and sisters how along the way. Many knew him from his reign running the Shenandoah gas station on the parkway during the 1970s fuel crisis. Through his good friend Ricky Mekeel, he ended up working at the Jim Waters Corporation in Poughkeepsie for 30 years as the cantankerous Materials Purchaser. He was the go-to guy when you wanted to know how many squares you needed for your roof and how much it was going to cost. Ricky was the best of friends, always caring for John and helping him out.

John was a fixture in Hopewell Junction over the years, most often at the Whortlekill Rod and Gun Club, following in his father’s footsteps. He served there in many different capacities, earning a lifetime membership and being voted member of the year a few years back. He had many friends there who he missed very much when his illness kept him from spending time there like he always did.

Things never got easy for John. After retiring from Jim Waters, he kept on fighting his illnesses with great courage, for a very long time. True to his early roots, he continued to have faith in God, going to church at St. Columba until his condition prevented him from doing so. We believe and pray that his suffering is now over forever and he has been united with mom and dad.

The family wishes to acknowledge and thank the many treatment providers who gave him great care over the years: Cindy Stone and the other wonderful people at the Poughkeepsie Wound Care Center, Dr. Sims and his staff, the staff at the Fishkill Dialysis Center, the staff at the North Westchester Restorative Center, and the countless other doctors, nurses, caseworkers and ambulette drivers who helped him through many difficult times. Especially in his waning days, you all became John’s family and gave him great comfort.

John was born in Poughkeepsie on March 4, 1956 the son of John Warren and Mary Jane (Feldsine) Seguine. John is survived by his siblings and their spouses, Sue and Rick Summers, James and Barbara Seguine, Thomas and Dianne (Crane) Seguine, Mary Jane Seguine (Kornbreck), and Charles and Judy Seguine; his cousins Brett and Beth Perkins and their father Albert Perkins; his aunt Mary Seguine Doherty; and by many nieces, nephews, great-nieces and great-nephews. Besides his parents, John was predeceased in life by his maternal grandparents, William and Bernice Feldsine, and his paternal grandparents, Lester and Mary Seguine.

Consider providing a gift of comfort for the family of John Seguine by sending flowers.

Posted Apr 06, 2021 at 04:40pm
Sue, Jim and family, my deepest sympathy to the family. John always had a smile on his face and a good sense of humor. I remember all of you growing up when I worked for your Grandmother at Sylvan Lake Telephone. He was too young. 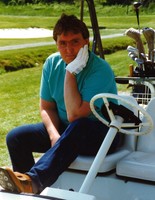